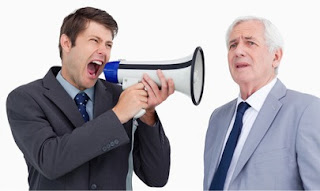 Did I use enough exclamation points? Does this remind you of some of the e-mail you get or some of the postings you see in social media?


Hype. It's all around us. It's in our mailboxes, on our computers and televisions and radios. Where did it all begin? Who was the first pitchman to scream, "I'm Crazy Joe for Crazy Joe's Used Widgets and I ought to be put away for selling widgets so cheap!!!!" Why did the next person think that his/her ad needed to be louder and gaudier? Where will it all end? Most of all, is it really necessary?


When I was in college, I attended a fine arts camp one summer. During one of the sessions, the leader asked about ten of us to do something that would attract the attention of the other hundred or so people in the room. The task of this hundred plus audience was to ignore us as much as possible and only pay attention when one of us really did something worthy of their notice.


You can easily picture the scene in your mind. Those of us who were trying to get attention were getting in the faces of our audience, shouting, pleading, urging. Then one young man did the unthinkable. He got up from his chair and sat down right in the middle of the room. He did not say a word. He just sat there while the rest of us were continuing to flail and wail and jump and jive to get someone to notice us. You can probably figure what happened. Every last member of the audience turned his or her attention to the man sitting quietly in the middle of the room. He had won.


There is so much hype surrounding us today that it seems as though there is very little truth in advertising. This could be a key to the successful marketing of your business. By simply and plainly telling the truth, you can and will stand out from the crowd.


A character played by Walter Brennan used to say, "No brag, just fact." Joe Friday of "Dragnet" fame was famous for saying, "Just the facts." This should be your motto for promoting your business. When it comes to self-promotion, exaggeration is simply not necessary. If you're good, the facts will prove it. If you're not, no amount of yelling or ADS WITH ALL CAPITAL LETTERS IN THEM will make you good.


When you are looking for someone with whom to do business, don't you go in search of someone you can trust? So does everyone else. We all want someone who will deliver what they promise. To me, that is the bottom line of what we should all be seeking to get across to our target audiences. Tell them what you will do for them, and then do it. Actions STILL speak louder than words, no matter how many exclamation points you put at the end of your sentences.
------------------------------------
Michael Gifford has been has often been called “The Go To Guy.” In his many years as an entrepreneur, he has been involved in business start-ups, aided in business expansions, registered a patent and trademarks, and authored a number of books and articles. Currently he serves as President of New Heights Marketing, Inc. in Sugar Hill, Georgia. Permission is granted by the author to reprint this article provided that this resource box is included in its entirety.
Posted by Michael Gifford at 11:10 AM

Email ThisBlogThis!Share to TwitterShare to FacebookShare to Pinterest
Labels: Get Stronger